Nestlé Indonesia is a subsidiary of Nestlé S.A. the leading company in the field of nutrition, health and wellness, with headquarters in Vevey, Switzerland. Nestlé SA was founded over 140 years ago by Henri Nestlé; a pharmacist who first mixed baby cereal to help a mother save her baby who was is very ill and unable to receive breast milk. 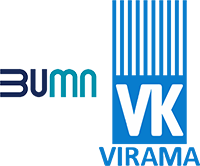 PT. Virama Karya (Persero) Sumatera Branch as a State Owned National Construction Consultant Company (BUMN), opens opportunities for competent professionals who have high integrity and dedication to join the Company and to be placed in the Sumatera and Java region with the qualifications and requirements as follows:

PT. Infomedia Nusantara (Infomedia) is a subsidiary company of PT. Telekomunikasi Indonesia Tbk. (TELKOM), the largest telecommunication provider in Indonesia with business portfolios: TIMES (Telecommunication, Information, Media, Edutainment, Services). By direction of Telkom, Infomedia is focus on handling the portfolio of Information service to become a leader in Business Process Management company in the region.